Forget 90-60-90 and experience true beauty and perfection with 16-55-68 at 3DZUG! With a length of 16 metres, 55 m³ load compartment as well as a load capacity of 68 tons for bulk goods, our Facns Bulk Goods Wagon convinces in every aspect.

Thanks to lengthy and very extensive fine tuning, this is one of the most realistic vehicles that we have ever built. Numerous refinements such as detailed work platforms and weathering can stand up to any close-up and a passenger view has also been added which is impressive in every respect. What's more, the 3DZUG Car Creator allows different versions of the bulk goods wagons so that fascinating variation is guaranteed. Realistic sounds, four tasks and a high resolution inscription round off the Facns.

Note: The scenarios require the following add-ons to run correctly: 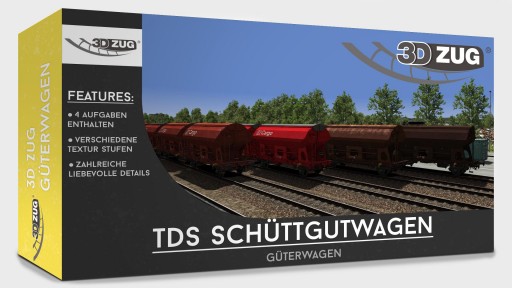 The Tds bulk goods wagon is said to be the small space miracle on rails. More than 1,000 wagons ha..