Due to the increasing demands of the industry, more than 500 new wagons of the Hbbills 311 type were ordered in 2000 and 2001 (on the basis of the Hbbi(ll)s 305/306 wagon). In order to meet current needs, the wagon was designed within the UIC-frame measure according to the latest information. A load height of more than 3.2m and an extension of further 2m created a cargo space of more than 140m³. As a result, the wagon contained an incredible 50% more space than its predecessor.  3D ZUG has taken up this modern wagon and elaborately and lovingly realised it for Train Simulator.

Thanks to the CarCreator utility, eight realistic versions of weathering as well as conditions from brand new to 'never seen a brush before' can be depicted. They can all be selected independently. Realistic sounds as well as a KI optimised version, along with four included tasks, complete this add-on. 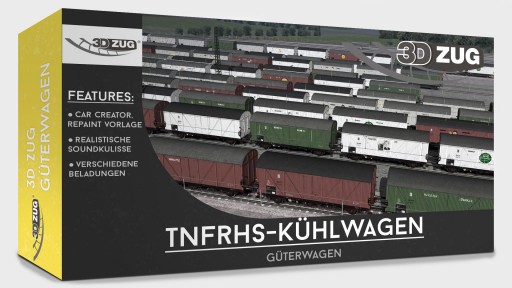 With the Tnfrhs 32 refrigerator car, we are once again saying "Back to the past". The "cool" journey..