This TrainSimulator wagon add-on from 3D ZUG includes the German Notfalltechnik crane train and breakdown train as well as a number of cutting-edge multifunctional containers for the crane train crew. Three static wagons and a static Class 185 loco are included in this package, which features realistic sounds, various resolutions and textures, highly detailed modelling and four scenarios for a variety of add-on routes.

This add-on contains the crane train and breakdown train - the crane itself is not driveable and is included as a wagon.

'Service delays' - this is the succinct comment generally used whenever something does not run according to plan, but what's behind this? Track works, broken switches, stuck brakes or a derailment? Whatever the scenario, it is beyond doubt that this is a job for a special train!

Our proven breakdown train, therefore, is given active support with the new 3DZUG rail crane. It is one of the largest rail cranes that has ever been in service in Germany and is - at over 100 tons - a heavyweight with a capital H. Now finally it can flex its muscles on site in TS2017.  Almost all conceivable scenarios can be simulated - in the event of damaged rail vehicles, the crane of the DB Notfalltechnik is used, whereas the track construction crane and the switch construction crane are available for construction works.

At 3DZUG this extraordinary rolling stock does not come alone, but also brings along various accompanying vehicles such as cutting-edge multifunctional containers (application-oriented containers - AOC). With this, the crane train crew has everything it needs on board, from workspace to sleeping rooms and recreation rooms as well as a kitchen equipped with a fridge. We have designed all this with great attention to detail. With this crane train you receive special purpose vehicles of high quality that will make your scenarios more diversified and realistic. And you are now the proud owner  of the largest and most state-of-the-art crane available in Train Simulator. For all those itching to get started with the crane train right away, we have included four exciting scenarios. 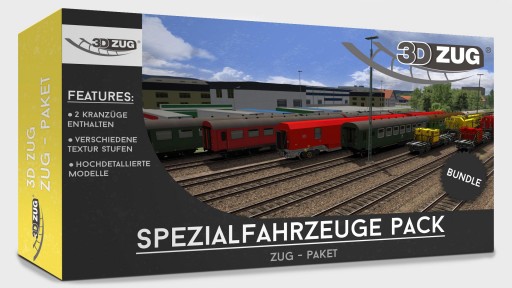 Delays in operations - that's what it's often called succinctly when things don't go as they should...