With the Tnfrhs 32 refrigerator car, we are once again saying "Back to the past". The "cool" journeyman was built from 1936 and was used in rail traffic for many decades. In 1981 his journey finally came to an abrupt end and the Tnf Rhs 32 was allowed to make the rails unsafe for the last time. During their long life, the refrigerated wagons underwent numerous conversions and were used for a wide range of goods from fish to meat.

Although the Tnfrhs 32 refrigerator cars have been on the back burner for several years now, don't be fooled by their old age: For our digital model we have, of course, developed numerous new state-of-the-art materials to give it an even more realistic look. A new detailed axle as well as numerous difficult attachments under the car round off our model.

Thanks to our popular 3DZUG CarCreator, you can customize your Tnfrhs 32 refrigerator car. In addition to the DB and DR versions, numerous beers can also be transported, so boredom is guaranteed. For this purpose, we also supply a 3D template, which enables you (with appropriate knowledge of 3D programs and the Train Simulator structure) to attach your own brands to the car. You can also choose from different colours, so that more than 130 variants are possible. Of course, our car also comes with a high-quality brand-new sound backdrop on your PC.

Start your journey into the past today.

Two sceanrios for "Im Köblitzer Bergland Reloaded" are already included in this package. 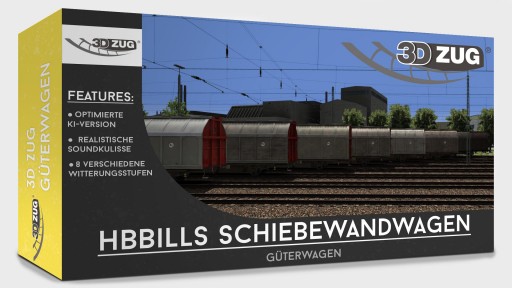