The Rübelandbahn JTG Edition consists of two products for a discounted price: The Rübelandbahn and a JTG scenario package that will challenge you with 4 exciting tasks on this special route!

Experience the unique Rübelandbahn, set in the time of the GDR in this scenario pack for Train Simulator.

On the uniquely challenging gradients of the Rübelandbahn, a wide variety of tasks await you. Your faithful companion is always the E251, a 6-axle electric locomotive specially engineered for the Rübelandbahn. A real powerhouse. In this scenario pack,  you'll take over a special train of the local authorities, bring sulphur gravel to the famous Michaelstein railway station or move empty trains to the impressive lime works in Rübeland to be refilled.

A total of 4 scenarios with numerous hours of gameplay are waiting for you! 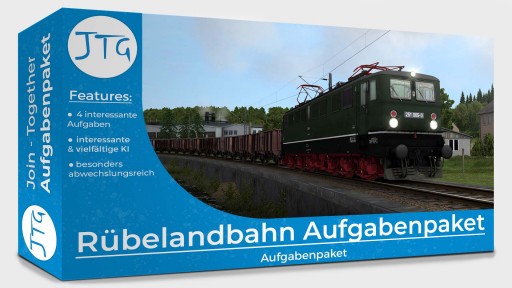 Experience the unique Rübelandbahn, set in the time of the GDR in this scenario pack for Train Simul..